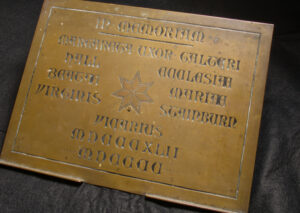 Early in 2014 my attention was drawn to an inscribed brass ‘memorial plaque’ being sold in Belfast on a well-known auction website. The first to bring this to my attention was a vicar in Northamptonshire, who’d noticed that the words inscribed in the plaque mentioned ‘Stainburn’, a picturesque North Yorkshire village whose church fell within my guardianship as the Field Officer working for the owner of that historic building, The Churches Conservation Trust. Fortunately the astute vicar emailed the CCT without hesitation asking, “isn’t Stainburn one of yours?”. My eyebrows were raised.

Surely if this memorial plaque belonged to St. Mary’s church in Stainburn, how had it ended up in an eBay auction? The clock was ticking with the auction ending in six days, the fate of the impressive looking artefact uncertain and with precious little time to investigate.

I knew of a burglary at Stainburn long before my tenure with the CCT – my former boss had once mentioned it to me more than once so I set to work to see whether the provenance of this ‘memorial plaque’ was indeed the Stainburn familiar to me. Further scrutiny of the eBay auction page revealed the inscription on the plaque to be…

In memory of Margaret, wife of Walter Hall, Vicar or the church of
The Blessed Virgin Mary at Stainburn 1842 – 1900

Reverend Walter Hall had indeed been the vicar at Stainburn between 1842 and 1900 and it was he whose kind benefactions also included the spectacular stained-glass window in the east end of the church and he who was buried alongside his wife Margaret in the churchyard, both being mentioned by name on their epitaphs.

Trawling through the CCT’s archive proved my former boss to be correct. There had been a burglary at Stainburn – in February 2002, the artefacts removed by the thieves being a 17th-century bishop’s chair from the chancel and one of the stained-glass panels from the east window which, coincidently, had been donated by the Reverend Walter Hall in the late 1800s and never to be seen again. The substantial monetary and historical value of those two items, compounded by the sheer audacity of the thieves in removing a stained-glass window panel, had undoubtedly overshadowed the removal of a far less significant brass memorial plaque.

My next task was to verify that this memorial plaque was indeed something which had belonged to St. Mary’s church in Stainburn. There are few inhabitants living in this isolated village on the top of a hill overlooking Wharfedale and they are outnumbered by sheep in the ratio of about 500:1, this having been upland livestock farming territory since time immemorial. Our local volunteer key-holder however, did hold some clues. Showing her a printed screenshot of the eBay page prompted a surprised shriek of “Yes!”. She continued, “that’s not a memorial plaque – it’s a Bible stand that used to sit on the altar when I was growing up here. It once fell on my foot – it’s very heavy and it hurt!”. As a result of the injury, the stand had been banished to the vestry in the 1970s, the back door to which had in fact been where the burglars had forced their way in, no doubt passing the Bible-stand when entering and exiting. To all intents and purposes, Walter Hall’s Bible stand had been cast aside and forgotten about for years to come. 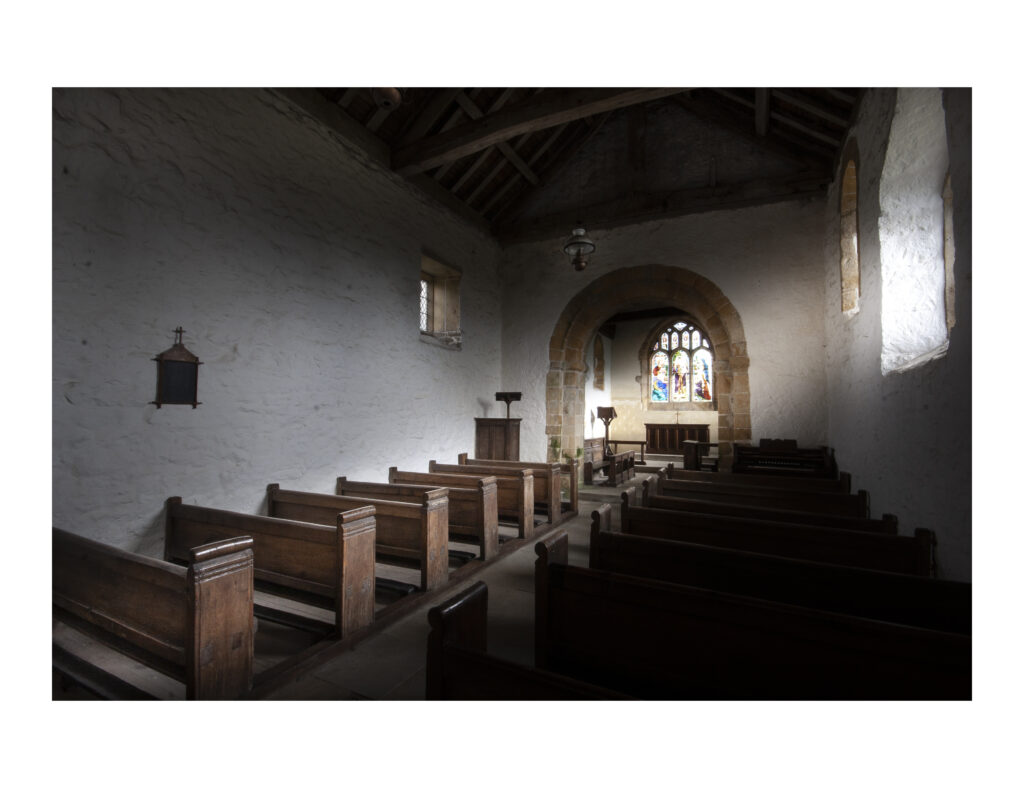 Having established the Bible-stand appeared to be the one once given to the church in memory of Margaret Hall and probably taken during the burglary, my next task was to persuade the eBay seller to, at least, end the auction and permit us to see the Bible stand to verify its authenticity. “I bought it in good faith”, was the response. The seller stood his ground, “I have a little eBay shop and I buy and sell things I find at boot fairs. It’s mine to sell”. I enquired of him how he had come about such a Bible stand. Of course, he couldn’t remember who had sold it to him and he was being absolutely reasonable as someone trying to make an honest living. I thanked him for his troubles and decided the only course of action was to speak to the police to see if they had any record of a stolen Bible stand from all those years ago. If it had been recorded as stolen in the burglary, surely the seller returning it would be the only moral course of action. We couldn’t even prove the handling of stolen goods under Section 22 of the Theft Act 1968. After all he had bought it in good faith at a boot fair and was not being dishonest. How could we prove mens rea? Could we even prove it had been stolen? Maybe a moral rather than a legal resolution was necessary. Tactful negotiation was the key.

Nevertheless, I needed to somehow register this as a stolen item to bolster my appeal for the Bible-stand’s return so my next call was to North Yorkshire Police to ask whether it would be possible to retrospectively add a suspected stolen item to a property-list from a burglary that occurred some twelve years earlier. The question as to whether this was a unique item remained – could this particular item, which I’d never seen or touched, be established to be the very item which since the 1800s had stood on the altar of St. Mary’s church in Stainburn. Could it be a copy or replica? Victorian Bible stands don’t normally display a serial number!

With the inscription, the relationship between Walter Hall and Stainburn, his wife Margaret, his mention in the east window and the distinctive character of this artefact (surely nobody would benefit from creating a replica of such a locally-significant item), North Yorkshire Police were persuaded to accept this was undoubtedly the Bible stand belonging to Stainburn and they were able to provide me with the historical crime-reference number that was pivotal to its return and would support my cause. They could not however be expected to investigate such an historical crime, that would be far beyond the realms of the public interest. 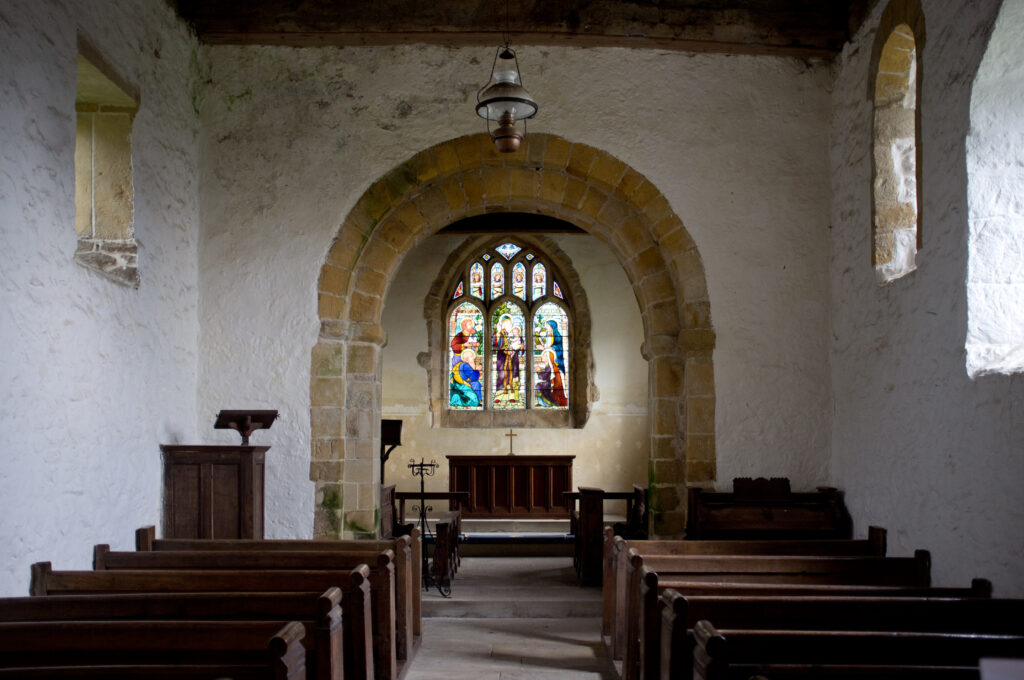 With only a day or two before the auction’s end, I made further contact with the seller and when I reported the result of my investigations to him – passing on the critical crime-reference number, he told me he wanted nothing more to do with the Bible-stand and told me I had managed to convince him of its origin. His words were touching, “thanks for looking into this – I really do believe this item belongs back in Yorkshire. Nobody should ever steal anything from a church.” Forthwith, the seller removed the item from his online shop, walked Walter Hall’s Bible-stand round to his local PSNI station, where it was taken into custody by a police officer who took the time to bubble-wrap it to protect it during its journey back across the Irish Sea. I arranged a courier – surely nothing could go wrong now?

The courier promptly arrived at the police station but where was the Bible stand? It couldn’t possibly have been stolen again?  From a police station? It transpired that the officer-in-the-case had secured it in his own locker for safekeeping but was now on leave. Even more fortunately, with a call from the desk sergeant prompting the officer to pop back into the police station from his well-earned rest days, coupled with the rarity of a patient parcel courier, the Bible-stand finally began its long journey home.

What could arguably be considered quite an insignificant object – there are other far more famous and infamous art and artefact heists, this Bible stand occupies a special place in my world, just as Stainburn does. The local community, especially our volunteer key-holders, were delighted to see its return and it is now proudly displayed in its rightful place, high above the spectacularly scenic Wharfedale, in the chancel of St. Mary’s, Stainburn, North Yorkshire.

St. Mary’s Stainburn is one of The Churches Conservation Trust’s collection of outstanding historic churches no longer used for regular worship. More information at www.visitchurches.org.uk

*Neither Indiana Jones, New Tricks nor Lovejoy were involved in the repatriation of this beautiful historic object!